This post contains affiliate links, and I will be compensated if you make a purchase after clicking on my links, at no cost to you.
Just like the country itself, Brazilian cuisine is a celebration of flavor and lip-smacking deliciousness. From traditional dishes like Picanha and Pão de Queijo to nationwide popular serving of stews like Feijoada and Moqueca, the culinary scene of Brazil is a melting pot of different unique and delicious ingredients.

Depending on how deep your knowledge about Brazilian cuisine is, you might or might not know the long list of dishes that the country boasts of. Here is a list of the best Brazilian cookbooks that delve into dishes from different cultures, made of different spices and ingredients, and cooked using different methods.

Here are our Brazilian cookbook reviews. 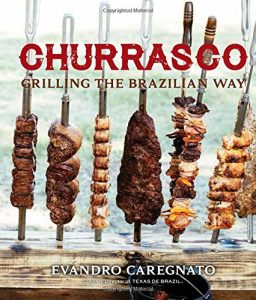 Churrasco, translating to ‘barbecue’ in Portuguese, is a unique style of grilling a steak over real wood or charcoal fire. Born and brought up in the Rio Grande do Sul, the author, Chef Evandro Caregnato, comes from a family of Gauchos. The author has inherited the knowledge of grilling meat in the real churrasco style.

The culinary director of award-winning churrascaria restaurant, Texas de Brazil, Chef Caregnato shares in his book ‘Churrasco: Grilling the Brazilian Way’ more than 70 delicious savory recipes. The dishes are taken both from his eatery’s menu as well as from his hometown, which also happens to be the birthplace of churrasco-style meat grilling.

In this Brazilian cookbook, you not only get to learn the exquisite recipes for authentic churrasco. But, you also also learn the stories of how the practice of grilling meat over open fire came to be and became a part of South American and Brazilian culinary culture.

2. A Taste of Brazil by Sarah Spencer 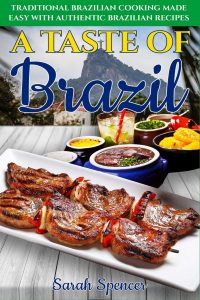 Brazilian cuisine is not restricted to indigenous and tribal dishes. It is widely inspired by a wide range of cuisines from around the world, including African, Middle Eastern, European, and Japanese.

Sarah Spencer’s Brazilian cookbook, ‘A Taste of Brazil,’ is a celebration of the eclectic fusion that Brazil’s cuisine is. There are 50 recipes in the cookbook, each of which focuses on using locally-grown ingredients to pack a punch of flavor in the taste of the preparation.

Every recipe in the book comes with a complete list of ingredients, detailed cooking instructions, cooking and preparation time, number of servings, and nutritional information. You will also find images of the complete dish along with the recipe to get an idea of how the finished preparation should look like.

Sarah Spencer has kept the focus on wholesome yet contemporary Brazilian dishes, such as Salt Cod Croquettes and Heart of Palm Soup in starters, Brazilian Churrasco BBQ, and Vegetarian Bobo in the main course, and Chocolate Truffles in desserts.

3. The Brazilian Kitchen by Leticia Moreinos-Schwartz 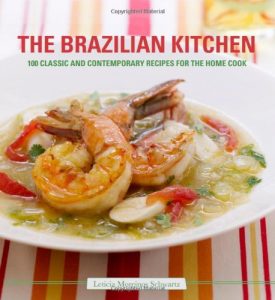 ‘The Brazilian Kitchen’ is an award-winning Brazilian cookbook by Leticia Moreinos-Schwartz, which highlights the country’s love for fusion food. The book largely focuses on native ingredients like cornmeal and yucca, which were once meant for the farmers and has now become a staple in Brazilian cuisine.

The recipes of the book are of sensible yet mouthwatering dishes, all the while being high on nutritional value and therefore healthy as well. Moreinos-Schwartz covers a wide range of preparations in her Brazilian cookbook, starting from basic stews and empanadas to fritters and croquettes to desserts inspired by around the world.

Some of the most-liked recipes from ‘The Brazilian Kitchen’ are Caipirinha Cocktail, Caldo Verde, and Brigadeiros truffles, among basics. Meanwhile, Passion Fruit Cannoli and Coffee Souffle are amongst the more inspired and luxurious ones in the cookbook.

Moreinos-Schwartz also has another excellent Brazilian cookbook that focuses more on the local cuisines of Rio de Janeiro. You can check that out as well. 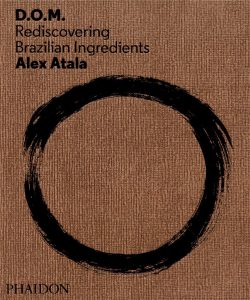 After having worked at several Michelin-starred restaurants around the world, Chef Alex Atala opened up the D.O.M restaurant. It is one of the most critically-acclaimed ones in Brazil’s Sao Paolo. A staunch supporter of Brazilian staple ingredients, Chef Atala, has refused to infuse any European or African influences in the kitchen of his renowned restaurant.

The same sentiment reflects in ‘D.O.M Rediscovering Brazilian Ingredients,’ Atala’s Brazilian cookbook, which also happens to be his first publication. The book features 65 authentic Brazilian recipes. These recipes come to your plates straight from the streets of Sao Paolo and the trees of Amazon.

Some of the more popular dishes from Atala’s Brazilian cookbook are Lamb Hind Shanks with Yam Puree and Pitanga, Priprioca, Lime, and Banana Ravioli, Fresh Heart of Palm with Scallops and Coral Sauce, and many more.

5. The Food and Cooking of Brazil by Fernando Farah 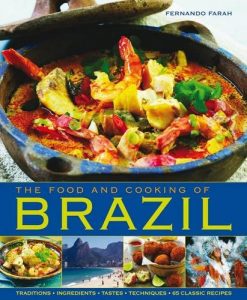 A well-gastronomic and food blogger, Fernando Farah, wrote about the food and its history in his Brazilian cookbook in detail. What kind of ingredients the early natives used, how were the dishes influenced by Portuguese and other European cultures, and how they came to be the current potpourri of flavors and textures – everything is covered in ‘The Food and Cooking of Brazil.’

Steering clear of any twists and turns, the cookbook talks about simple, delectable Brazilian cuisine and inspires the readers to indulge in the same. All the recipes are excellently explained with stunning images and the complete nutritional value mentioned. The dishes are also very easy to recreate without you requiring to use any out-of-the-ordinary ingredient or equipment.

Whether you are a native of Brazil and want to delve deep into the cuisine of your own country, or you are from elsewhere and want to learn the eclectic recipes, Brazilian cuisine has to offer, buying a good cookbook is how you start it.

You will find several cookbooks in your local bookstore as well as online. But how to know which Brazilian cookbook will suit your needs? We have got you covered. Here are a few things you need to consider before purchasing a Brazilian cookbook.

Type of the Recipes

Before buying a Brazilian cookbook, make sure that it has the type of recipes you are looking for. Brazil’s culinary scene offers a vast range of dishes, and there are multiple varieties in that as well.

Some cookbooks focus solely on grilling and barbecuing, while others are about absolutely basic stews and curries. And, some others might be on contemporary Brazilian dishes with modern twists too.

Depending on which type of preparations you are trying to experiment with, the cookbook you should buy will also vary. If you want to recreate Brazilian street foods, there is no point in going with one that talks about fudges and crème brulees.

If you are health-conscious and want to know exactly how many calories you are intaking, it is better you purchase a cookbook that offers nutritional recipes and steers clear of oil and spice-heavy ones.

Brazilian cuisine in its essence can be quite healthy, especially if you go with locally-grown meat and vegetables along with herbs and spices. This cuisine is one of the pioneers of creating tasty food with healthy ingredients.

Do a quick flip-through of the cookbook or take a look at the content table to get an idea of what type of recipes it offers. If you see consistency in healthy and nutritional dishes, go for it.

Certain cookbooks not only mention the total nutritional value of a dish but of each ingredient mentioned as well. Pick one such Brazilian cookbook if you are particular about what you are putting inside your body.

Cookbooks are not meant to be just a compilation of recipes. They have the opportunity to become so much more than that if the author deems it fit.

First of all, any good cookbook should have additional information about every ingredient they list in each recipe. You can expect the best cookbooks to have details on what variety of ingredients to purchase and which one goes the best with the said dish.

The cuisine of a country is a part of its identity. Therefore, a Brazilian cookbook can very well be an expertly painted picture of the country’s culture and tradition. Several Brazilian cookbooks delve deep into the culinary history of the country, mentioning the source of every dish and its ingredients, how did the dish come to be, or any other trivia associated with the preparation.

These little tidbits always make the whole process of cooking a thousand times better. You also get to enrich yourself in the subject of Brazilian cuisine. So, basically, you do not just purchase a few recipes, but an entire experience in itself.

Once again, it is not necessary that a good cookbook should have excellent images along with every recipe. However, it certainly elevates the experience. Moreover, the more pictures you have of a dish, the clearer the process of cooking becomes.

You also get to compare the dish you have prepared with the one in the book to check how successful you have been in replicating the dish of the cookbook. Either way, it makes the cooking more fun to have pictures to refer to.

So, while it is not necessary for cookbooks to have attractive images, it is certainly a benchmark of a quality cookbook that you can trust.

What is the point of a cookbook for home if the recipes mentioned in it cannot be followed at home? Several Brazilian cookbooks are written by professional chefs and restaurateurs, but that does not necessarily mean that the recipes will be super difficult to follow.

An ideal cookbook for home chefs should have simple methods, easy-to-find ingredients, and equipment that are available to any average household. Many veteran chefs have written cookbooks on family-friendly dishes with easy-to-make recipes that you can recreate for a Sunday brunch or for your kids’ school lunch without any hassle.

Keep an eye out for such books, unless, of course, you want to experiment with more professional recipes.

Author of the Book

It is not necessary for an author to be a renowned and professional chef to write a good cookbook. You can find excellent Brazilian cookbooks written by food bloggers and gastronomy enthusiasts. However, which author you can purchase depends on the type of recipes you are looking for.

If you are eyeing to buy something absolutely nutritional to follow a particular diet, then you should look for cookbook authors who specialize in that field. If you want to learn restaurant-quality dishes and replicate them at home, buying cookbooks written by Michelin-starred chefs and restaurant owners might be a better option.

If you are simply starting off with said cuisine and want to learn the basics of it first, you can choose from one of the top Brazilian cookbooks in the market, some of which are listed in this review. 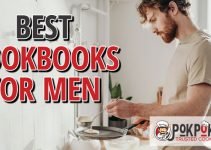 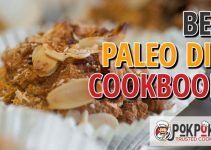 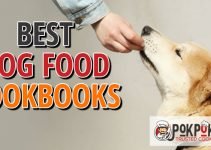 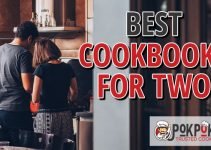 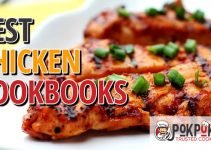 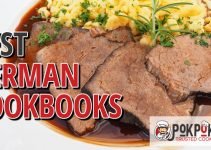 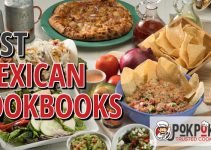 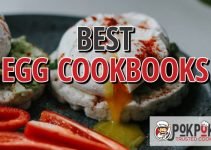 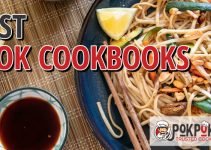